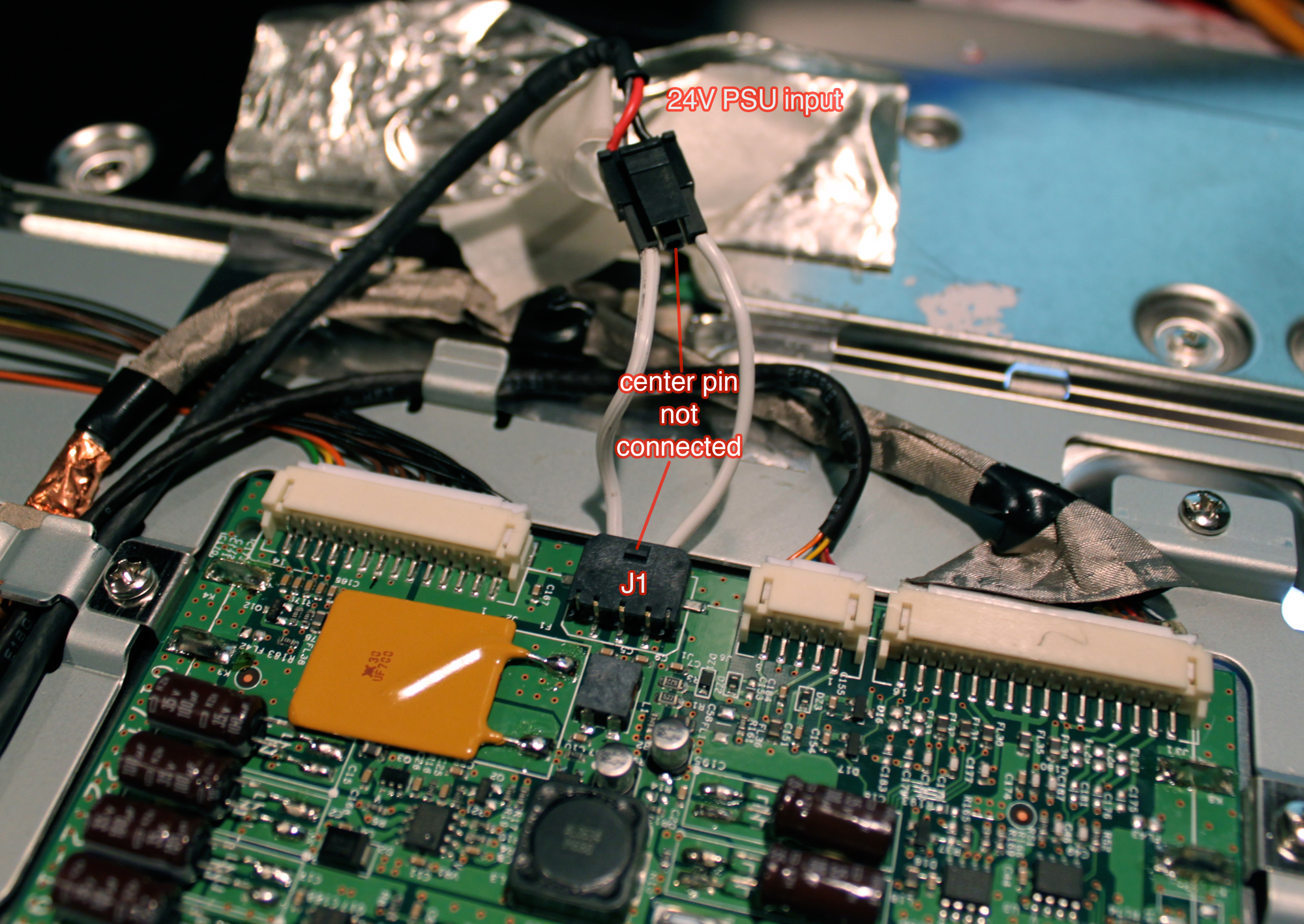 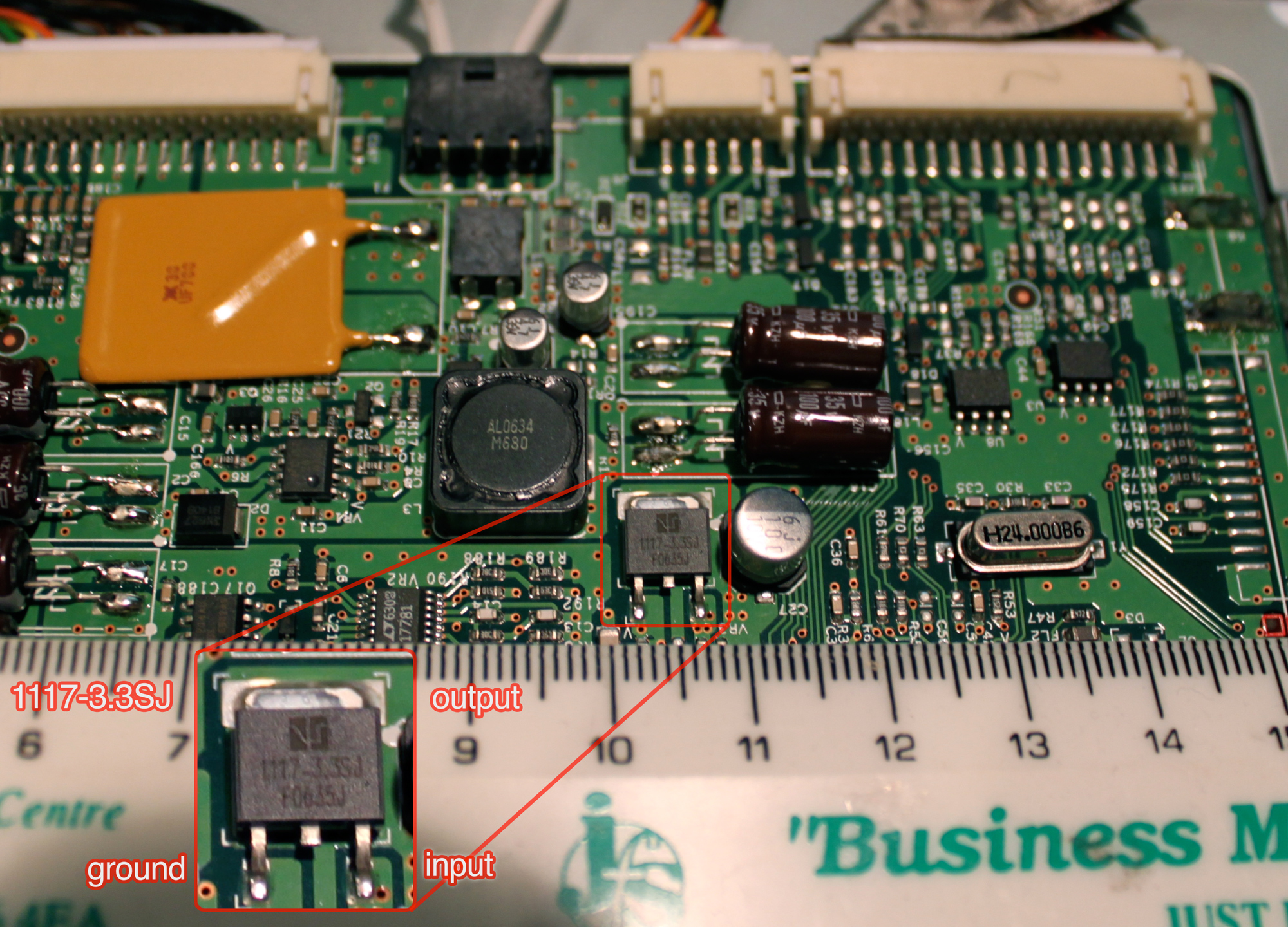 An explaination of one way to resolve an issue with an Aluminum Apple 23 inch cinema display (circa. 2005-2006) suffering from a ‘short - long - short’ flashing power light & no visible display. This solution worked for me, it may not work for you, but others have reported similar sucesses, see the forum posts in the links for more info.

Has a tip on disconnecting the middle pin to the power brick. This is his only post WTH!?

Has a video of pin blocking hack & a Flickr picture of the hack.

Mentions fitting a voltage regulator to replace an existing one, links to the ehmac.ca forums…

The second post by A1082 has the fix, I shall detail it here along with a few other steps.

Thanks for the great info A1082 - he gets credit for this fix.

The monitor only shows the short-long-short flashing error on the power LED. No other signs of life - the display is black (the ‘torch test’ shows it is not a failed backlight). Apple System Profiler can see the monitor as a display device when connected to a Mac.

Trying a 150W cinema display power supply failed to make it work (others have said this is a fix for this error on the Apple discussions).

I found the ‘Service Source’ manual (contains take apart & trouble shooting guide for Apple service technicians) & followed it’s troubleshooting steps. The end of the process suggests replacing the entire main board, or replacing the display. Apple only reccomend it’s technical support replace entire parts instead of troubleshooting thier components. This is helpful if you have 1/2 the original cost of the display available to fix a 5 year old monitor.

Instead I tried the ‘pin hack’ but I did so after opening the case. I removed the J1 connector & rewired two of the three pins to the board. See picture 1. To test the hack the LED & side switch panel need to be reconnected.

The monitor worked without the grey center pin wire connected. It seems to be a sensing line to prevent high drain displays destroying the lower rated supplies that can accidentally be connected because they have the same connector.

After reading A1082’s post on ehMac I measured the voltage of the 1117 regulator. See picture 2.

It was reading 4.2V on the output - not great for a 3.3V regulator. I replaced this with a higher rated version LM1086 & the monitor now works without the ‘pin hack’.

Removing the existing regulator is difficult, I removed the two legs first then managed to separate the casing from the heat sync tab. Because the heat sync is under the regulator body you need quite a lot of heat to desolder it. In the end I left the heatsync in place & connected the new LM1086 to the heat sync. The 1117 casing cleanly pulls of the heatsync.

Because the LM1086 is a larger component it needs to be placed away from the original location. I extended it to above the main board, and also heat shrinked the connections for insulation. Make sure any heat it generated will be dissipated away from other parts.

I am servicing a 23 inch unit now. The power brick has worn out filter caps, which is expected in a 5 year-old power supply unit (PSU). Additionally, I am going to replace all the capacitors on the display logic board. From what I see in your picture, Apple placed the surface mount device (SMD) filter cap way too close to the main regulator and did not provide adequate heat sinking. My suggestion to anyone having the case open is to glue on a piece of aluminum to better sink the 3.3 volt regulator. Just a little more heat dissipation can dramatically increase reliability, so consider it a justified modification. - CD

Thanks for the info

Have you checked the voltage on the LDO?

This one was running over voltage. It would be intersting to know if an undervoltage one also allows the display to work when using the ‘center pin hack’.

Was the PSU painfull to open? It seems to be sealed in traditional Apple style!

Any idea what short-short-long code on the power button is? I have a 23” Apple Cinema, and I tought the adapter was out and I bought one, and it’s still doing the same thing. I also bought a logic board and replaced it without any luck. this a 2000 model.

Does anyone have any input or suggestions?

You need to find the ‘service

You need to find the ‘service source manual’, it says…

“short, short, long - The display is detecting a backlight error. Check the display’s power connections and restart the computer.”

Thanks a lot, Pixelchimp, for an excellent and concise review of the Apple Support monsterthread on the subject. BTW, same goes for your own valuable contributions in this thread.
Despite all my posting in that thread,however, I’ve not been able to repair my own ACD 20” yet.
It seems in mine, Q1 has shorted out. Could you possibly identify which transistor Q1 is supposed to be? According to someone on ehmac.ca, it must be a BCW89R (i.e. a simple switching transistor in a SOT23R housing). Identification is unclear, though, because of the cryptic SMD ID on top. And the tricky part is the “R” suffix: it means that collector and emitter have switched places.

I have only this one source to rely on, which makes it very tricky, especially in the case of the “reversed” package, so you will appreciate I want to make very sure!
Great thanks already! And sorry for my being so stubborn about this.
PS: this Q1 burning out appears to be fairly generic as well, so it seems to be the third major cause of this family of ACDs malfunctioning. Along with sense line (#1) and LM1117 (#2) dropping out. Looks to me these issues might be interrelated.

The power bricks seem to be holding out, however. Except of course of the above mentioned-and-to-be-expected overhaul of electrolythic capacitors. Same deal for example with LaCie PSUs!

PS#: my, did I have trouble in posting this! Eventually it seems that your blog watchdog had an issue with my short for the word “transistor”, which also seems to mean “male in female disguise”. One bl*dy fcking prude of a profanity watchdog if you ask me!

Cheers for posting & persisting with mollom’s prude filter :^) I’ll pass it on to them.

Send me the link for the ehmac thread & I’ll see what I can find. I emailed you with a bit of info, Q1 may be labelled on the board.

I like how the filter allows f*cking but not trannies, marvelous.

I had a dead 23 Cinema display. I used two very narrow pieces of regular masking tape, attached it to the power supply and it works. Thanks for saving me $400 repair on a display that cost nearly $1000.

I love Apple equipment, but don’t have much in the way of kind words for the company.

awesome post–i’m going to open up my ACD and check this part. do you have any photos of the end result, with how you soldered the new LDO and used the heatshrink? you have so many other pictures that i imagine you have one showing the alternate, final position to help us out.

I’m afraid in my excitement

I’m afraid in my excitement of fixing it I didn’t take any additional pictures after soldering on the new LDO.

I couldn’t unsolder the large flat ‘heat sync tab’ that is under the LDO so I extended the connection to just above the J1 connector. I also made sure it was well insulated before taping it down with the sticky foil sheilding.

Just make sure you check that the old one is not opeating correctly before you remove it.

You have mentioned above that you were able to get the “Service Source Manual”, with some trouble shooting guide (hopefully with some diagram), for service technicians.

My question to you is: How could I get hold of a copy of such manual ?

Perhaps from the same source, or yourself ?

I would be very grateful, for such favor.

Needless to say that whatever I may find (with luck or persistence) would be shared with the community.

Search for the term ‘service source’ & the Apple model name. They appear & disappear from the web.

Mactracker is really good for finding the actual model details.

I haven’t managed to find schematic’s that go into any real detail.

I have a 23” A1082 display with short-long-short issue. I first tried the “tape-the-middle-pins” trick but it was a no-go.

So i opened it up and also measured >4V on that 3.3V regulator so i ordered a replacement and now i get solid 3.29V output there.

The thing is the screen still has the short-long-short problem. I also tried cutting the middle wire from the dc connector without any changes.

Should i crack open the power supply and remove the resistor mentioned here: http://macs2u.blogspot.co.uk/2013/10/fix-for-apple-cinema-display-power….

do i miss something here?

P.S. I used good wires cut off from an ATX psu to connect the larger regulator.

The tip posted on ‘Macwise

The tip posted on ‘Macwise and more’ is simply a pemanent way to do the ‘center pin hack’. You have already said that this made no difference, so I doubt it will change anything.

Sorry, it looks like something else could have failed. It’s difficult to tell what it could be & Apple don’t release wiring/ circuit diagrams so troubleshooting is going to be tough.